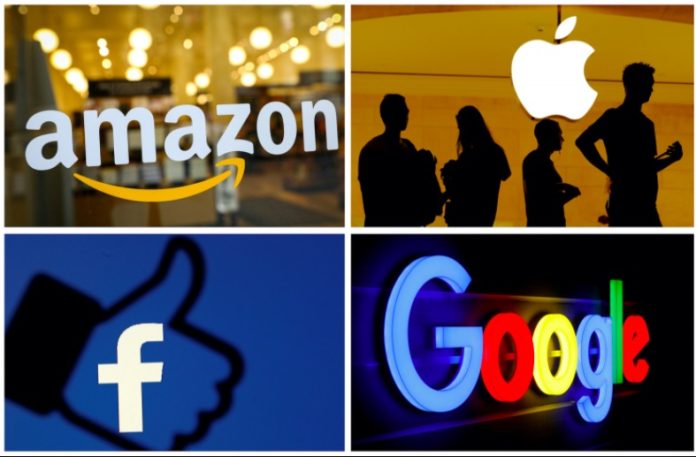 While Covid-19 has sent economies world over on a slippery slope and companies are either shutting down or deep–pruning their wings, one sector seems to be on a boom; and US lawmakers are worried that like the gun lobby and the power of tobacco companies, tech companies may dominate life and everything around it.

It is in this backdrop that top tech executives appeared together for the first time at an antitrust hearing in the US.

Chief executives of Google, Apple, Facebook and Amazon testified before the members of the US Congressional panel on whether their dominance has harmed the economy, stymied rivals and left consumers hapless in a choiceless world.

Jeff Bezos of Amazon, Tim Cook of Apple, Mark Zuckerberg of Facebook and Sundar Pichai of Google spoke by videoconference as members of Congress met in person on Capitol Hill.

Obviously, all of them denied those claims.

The hearing marked the end of a year-long investigation into the companies by a committee of lawmakers. Many federal and state antitrust officials are also investigating the tech giants.

In a series, we bring you excerpts of what transpired before the House Antitrust Subcommittee on Wednesday:

Putting up a strong defence in his sworn testimony, Tim Cook backed the company’s App Store commission structure claiming that the majority of the apps pay no commission at all; however, with others it is either 15 or 30 percent, based on the specifics of their particular situation. He said developers were all treated equally and that Apple wouldn’t raise commissions, because it had to compete for developer interest in its platform as well.

But the House Subcommittee had its own version. The documents shared by the subcommittee as part of their investigation clearly shows that exceptions to Apple’s rules have been made — notably, with Amazon’s Prime Video app. In addition, the subcommittee said Apple may have never raised commissions, but discussions were not ruled out. It had once even considered raising commissions to 40% in particular situations.

The lawmakers were deeply armed with a huge bunch of internal Apple emails and interviews from App Store developers who said that Apple doesn’t uniformly enforce its rules and has its own darlings.

But their quizzing of Cook over App Store fees seemed to initially reveal little in terms of new information about Apple’s practices.

Cook deep-emphasised that 84% of App Store apps pay nothing to Apple in commissions. It’s the remaining 16% that pay.

Lawmakers wanted to know if Apple was the sole decider on what gets published on the App Store and Cook agreed that it was. Since the App Store was a “feature of the iPhone, much like the Camera and the chip is.” He further clarified that Apple’s control over apps only extended to native software applications, not web apps, but denied Apple treated developers unfairly.

“We treat every developer the same. We have open and transparent rules,” Cook said, in his testimony. “It’s a rigorous process, because we care so deeply about privacy and security and quality. We do look at every app before it goes on,” he added.

But that may not be the solemn truth. Emails in 2016 between Apple SVP Eddy Cue and Amazon CEO Jeff Bezos show that Apple negotiated a special deal with Amazon over its Amazon Prime Video app for iOS and Apple TV.  In an email dated Nov. 2016 — before the 2017 launch of the Prime Video tvOS app —  Apple agreed to take only a 15% revenue share for customers that signed up in the app using Apple’s payment mechanism.

The details were shared on the House Judiciary Committee’s website.

In April this year, Apple confirmed it had a special package for Prime Video and a small handful of other apps, which were subscription video entertainment providers.

The lawmakers wanted to know whether there was anything that could stop Apple from raising commissions. Cook responded saying Apple had never increased commissions since day one. Moreover, he argued that competition for developer interest would stop it from raising its cut.

But in internal emails from 2011, Apple did discuss raising commissions — all the way to 40% for the first year of recurring subscriptions.

Amidst pandemic, PayNearby Aadhaar ATMs see a surge in withdrawals and...